What is Black Knot?

Black Knot is a widespread fungal disease that attacks plum and cherry trees. It is easily identified with its hard, uneven, black galls that seem to enwrap twigs and branches.  If left untreated it effectively strangles new growth, encircling the branches and dooming the tree to deterioration. The galls produced by the disease provide a gateway for additional disease and insect infestation which will be detrimental to the overall health of the tree.

The fungus, Apiosporina morbosa, singles out trees of the Prunus genus, which represents more than 400 species of flowering plants in the rose family.

Where is Black Knot Found?

Fort St. John, along with many other areas of British Columbia and Alberta is experiencing an infestation of Black Knot fungus. You likely have walked by a tree infected with Black Knot and wondered what on earth is that?  Combating the disease requires cooperation from all citizens, businesses and municipalities to be vigilant and remove the black knot abnormalities. 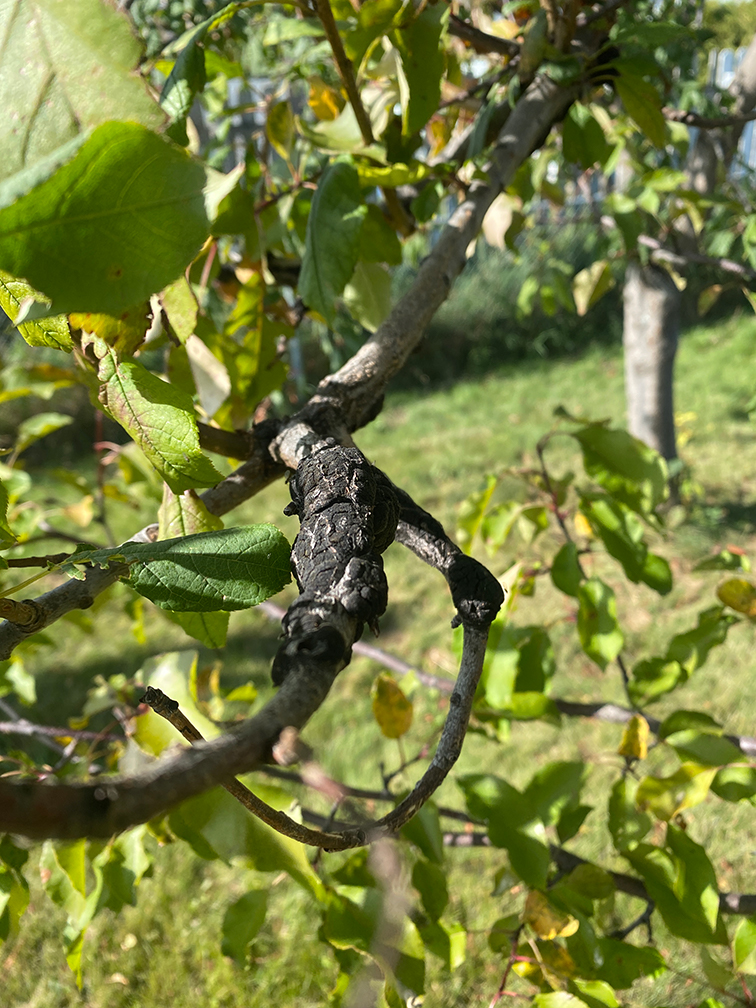 Black Knot is a slow developer, taking a season before it’s visually apparent and producing spores. During the first year after the tree has been infected, Black Knot is not obvious because the small, light-brown and/ or olive green swellings do not stand out, and the infected parts are often covered by dense foliage. It will develop at a succulent growth point as a result of spores landing and infection taking place. The trick to controlling the fungus is identifying the infection well-before the disease becomes firmly established.

If left to grow the swelling will grow until it is mature after 2-3 years. The mature galls are easily identified as hard, black, 10 to 15 cm (4 to 6 inches) and may be somewhat ruptured. Mature galls will produce and release a vast amount of spores during the bloom period, resulting in a rapid increase in infections. The fungus continues to grow internally and externally, with the branch eventually becoming girdled and dying. It will effectively strangle new growth and the tree will be more susceptible to insects and other diseases using the galls to enter the tree.

April and June in particularly during wet, warm weather. A few common symptoms you may see are:

The fungus releases spores heavily during blossom time, just before trees begin to leaf. After spore release, knots turn dark. By autumn they appear as black knots. Knots will continue to grow until they surround a given branch and kill it. If the infestation spreads, it may eventually kill the tree itself.

As with any tree disease, vigilance is key. Follow these tips to gain the upper hand in disease prevention or containment:

Experts disagree about the effectiveness of fungicides on black knot disease; warning against relying on fungicides to cure this disease and prefer regular pruning of infected areas. Most experts agree that fungicides are ineffective unless you also follow good pruning and sanitization practices.

If monitoring and controlling Black Knot through pruning fails, or to protect young or highly susceptible trees that are likely to become infected, fungicide sprays may be applied. Fungicides can help to inhibit spore production but will not kill the fungus that is already present.

Fungicides should be applied in early spring before bud break and at regular intervals until the new shoots have matured. Make sure that the label specifies the use of the fungicide for your particular Prunus variety, and that it is registered for use on edible Prunus cultivars if that’s what you are using it for.

Prunus species are frequently infected with Black Knot. It is recommended to plant a different species that is not prone to the disease. Annual monitoring and pruning by citizens, business and municipalities will aid to eliminate Black Knot from the area.