The purpose of this report is to provide a long term guiding plan for the physical evolution of the City of Fort St. John.

The community’s population growth was projected for a 50-year timeframe. For the initial 20 year period up to 2036, the high growth scenario (2.2% annually) from the G.P. Rollo report (prepared as part of Energize Downtown) was previously received by City Council and staff and has been used for subsequent work in this plan. For the 2036 to 2065 timeframe, low (1%), medium (3% decreasing to 1%), and high (3%) annual population growth scenarios were compared. An accelerated growth scenario which contemplates a 5% annual growth rate from 2015 to 2024, followed by lesser rates (3% decreasing to 1%) through to 2065 was also considered to reflect recent circumstances, and the advent of proposed natural gas and Site C industrial development activities. The medium growth scenario was selected as the preferred option for this plan, resulting in a projected 2065 population of 62,000 people.

The projected population was used to estimate the future residential, commercial, industrial, and institutional land needs for the community. In addition to the 370 hectares of vacant lands inside the City boundary (not including the 2014 expansion), more than 1,300 hectares of land will be required outside the boundary to accommodate future growth under the medium growth scenario. 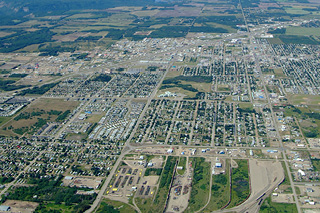