The existing Fort St. John RCMP Detachment building is over 35 years old and nearing the end of its useful life. It currently houses over 90 employees including a combined total of 65 police officers from both municipally and provincially funded units, and 25 support staff responsible for an area of approximately 46,700 km2. The replacement RCMP Detachment is being constructed just north of the current detachment and will be municipally owned and leased by the RCMP in what is known as a Post-Detachment model combining both municipal and provincial RCMP staff. 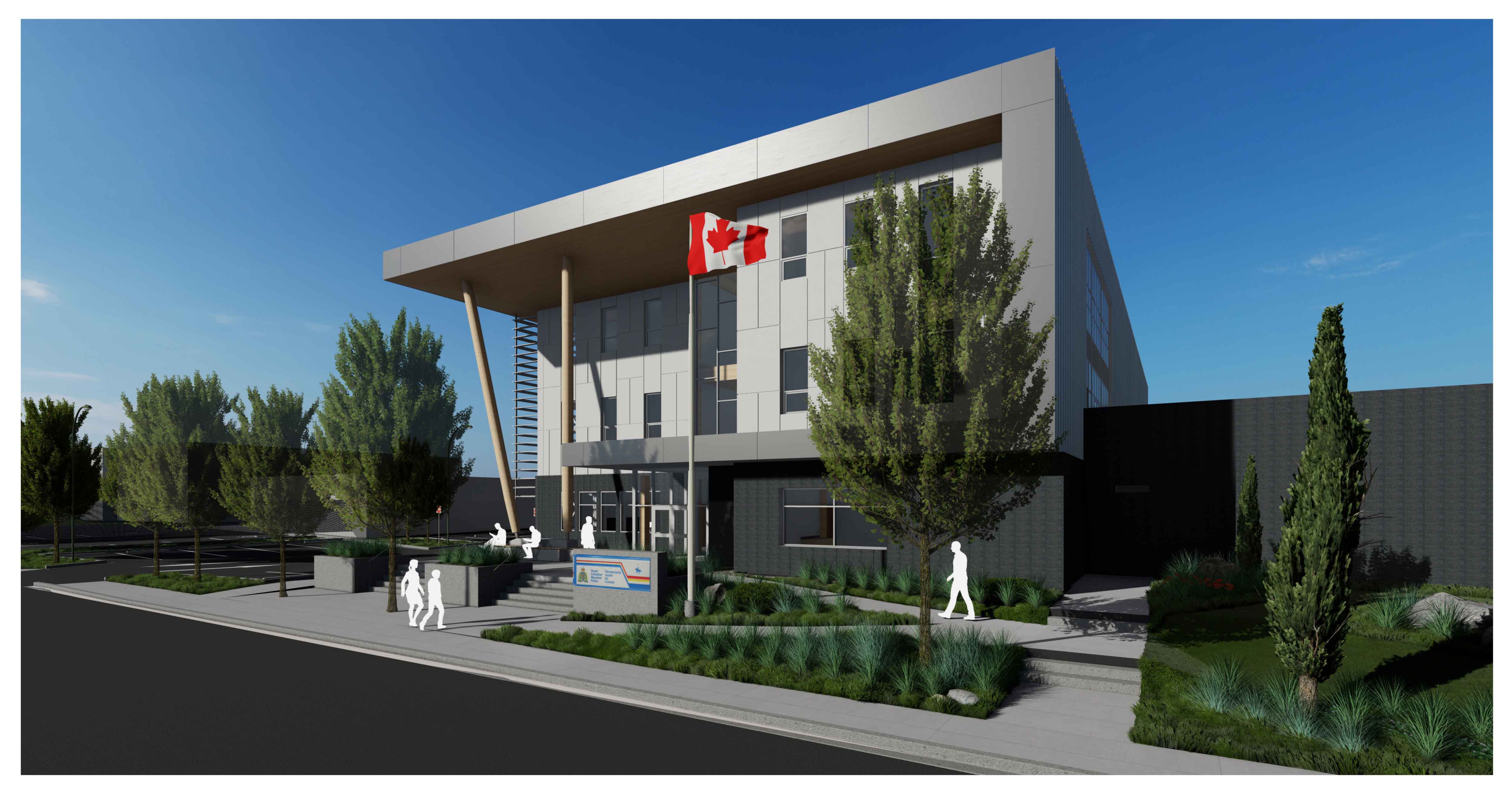 The $51.4 million detachment, located just north of the current detachment, has a significant street presence.  With its large overhangs and dramatic 3 storey heavy timber columns on the east façade, the building will attract some interest from the streetscape.  Two large awnings are provided to shelter pedestrians at the main entrance and civic plaza.  The upper awning is 4m deep and extends across more than half the length of the east façade.  It provides shelter to the plaza, bench seating, and public bike parking and warmth in the form of an elegant wood soffit.

To create interest, the building roof appears to fold down 90 degrees and return horizontally to create a second layer of cover just above the first floor. This lower canopy provides shelter for the main entrance and contributes to the pedestrian scale. These overhangs will attract some visual interest in addition to providing significant coverage at the front entry plaza.

Instead of traditional tendering and design, the RCMP Detachment is utilizing an Integrated Design Process lead by LMNTS Project Services. In this process, a team of professionals, including architects, engineers, and project managers, work collaboratively to design the building. This values-based approach, instead of a cost-based approach seen in typical construction projects, leads to greater efficiencies, improved designs, and higher quality projects. All while we continue to adhere to requirements of transparency and accountability following our purchasing and procurement policies.

The conceptual building design focused on three energy performance targets: net zero energy (NZE), PHIUS+ (Passive House Institute US) and PHI Passivhaus (Passive House Institute, Germany). The City of Fort St. John currently owns one residential passive house, but the proposed detachment building would be the first municipal building to be built to this standard, and one of the first of its kind in the province. Other municipalities are considering this concept for their own upgraded RCMP detachment buildings. Several energy models and estimates were completed and based on these models a Net Zero Energy target was recommended to be adopted for the replacement detachment to maximize economic and environmental benefits.

Fort St. John currently has one residential passive house, but the proposed detachment building will be the first municipal building to be built to a Net Zero Energy Target and will be one of the first of its kind in the province. By monitoring the energy consumption and on-site renewable energy generation of the building, City staff will be able to observe quantifiable benefits of this type of construction, with the goal of advocating for more low energy construction of municipal buildings. 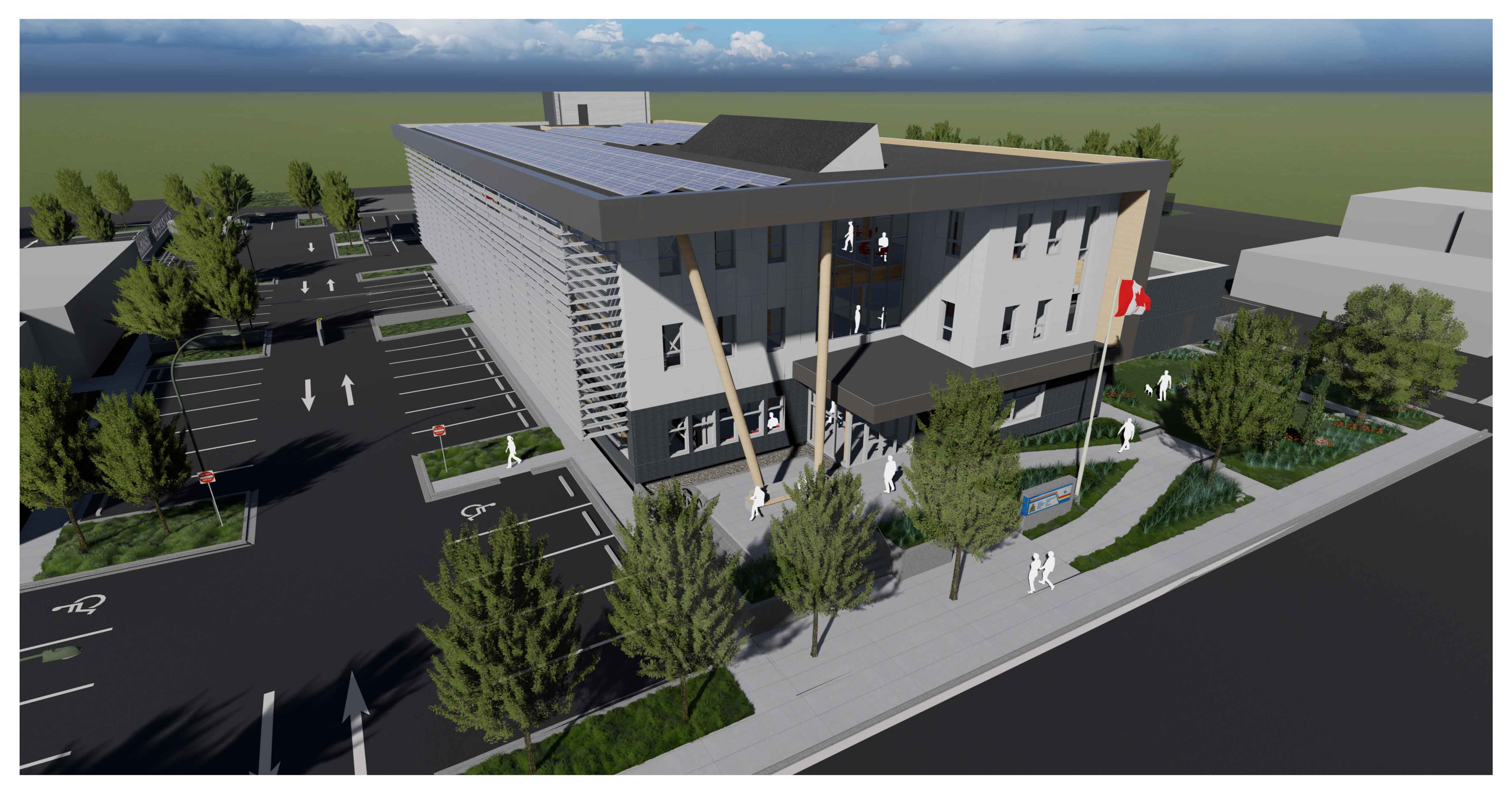 The roof and HVAC systems of the building have been designed to allow for the future installation of a 145 kW photovoltaic system. This would allow for on-site energy generation and help the building achieve annual net-zero energy consumption. However, due to the limitations on the size of solar generation systems of BC Hydro’s Net Metering Program, the building will not achieve net-zero energy consumption unless the full build-out of photovoltaic cells can be installed. The City continues to actively advocate for changes to the Net Metering Program to meet our energy usage goals. The construction of this project will demonstrate to others that it is possible to construct energy-efficient buildings in an economically sustainable way and that there can in fact be cost savings associated with energy efficiency.

By constructing the building to be Net Zero Energy (NZE) ready, it is estimated that the building will consume 149,507 kWh of energy per year. This is much lower than the estimated 994,071 kWh that would be consumed per year if the building was constructed to the National Energy Code of Canada for Buildings (NECB), 2011. This reduced energy consumption is associated with a $17,941 annual operating cost, as compared to $82,397 in annual operating costs for a building built to NECB 2011 targets; or an estimated annual savings of $64,457.  While there is a slight cost premium of $1.3 million, associated with the construction of a Net Zero Energy ready building, the cost savings show clear cost benefits over the NECB 2011 energy target.

Other municipalities are also already considering this concept for their own upgraded RCMP detachment buildings.

Many of the materials that will be used in the proposed detachment building are innovative and previously unused in Fort St. John. Most of the floors and roofs in the new detachment building will be built with BC-sourced Nail Laminated Timber (NTL) Wood Decking. As it has a low embodied energy and will be locally sourced, the use of wood throughout the project will have a low carbon footprint due to reduced emissions from the shipping of materials. Much of the building structure will be prefabricated which will produce less construction waste than typical construction methods. 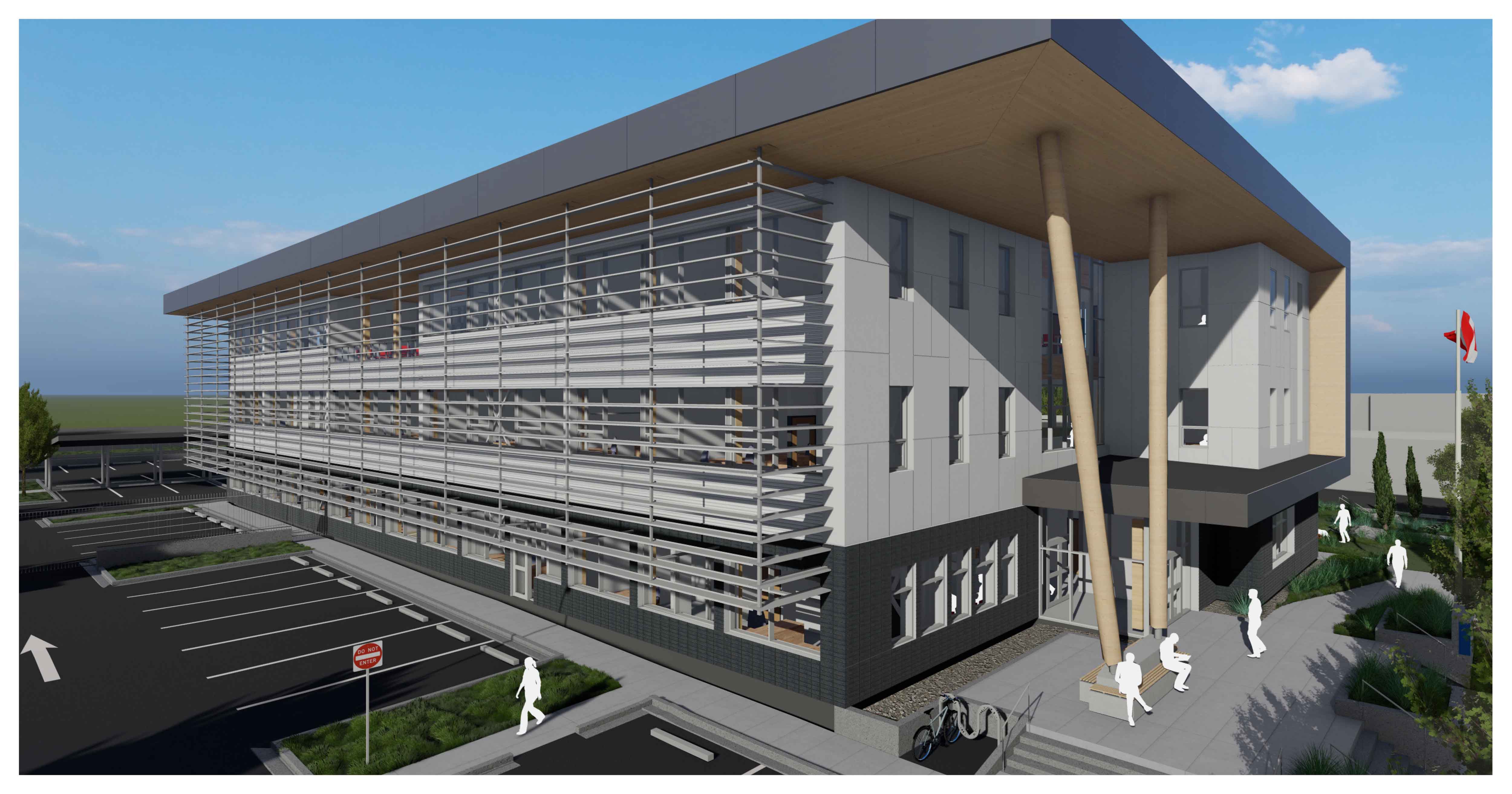 Mineral wool semi-rigid wall insulation is being used due to its environmentally friendly, fire-resistant properties, and moisture-resistant properties. Extruded polystyrene foam insulation is being used to reduce energy loss from the building and thus reduce the amount of energy required to maintain the internal building temperature. Fibreglass triple glazed windows are being used to lower heat gain/loss from the building and fibreglass cladding clips will reduce thermal bridging to improve the thermal resistance of the exterior wall. Sunshades are proposed to supplement window insulation and contribute to aesthetics, sustainable design, and occupant comfort.

The use of these new materials will allow the proposed detachment building to be an example for local contractors, developers, and elected officials. It will allow the City to provide educational opportunities on energy-efficient building practices and how to implement them in northern BC.