In 2018, as part of the Downtown Action Plan, the City of Fort St. John initiated the process to design and create a “Festival Plaza”, envisioned to be a year-round accessible public open space for hosting a wide variety of programmed events, arts, private functions, entertainment and celebration. The site is located on the northwest corner of Centennial Park, at the intersection of 96 Avenue and 100 Street.

Through a series of community engagement sessions, the vision for Festival Plaza was conceived. Over the past two years, the design of Festival Plaza has been refined to meet the needs of many different user groups and to align with available capital and grant funding sources. In Spring 2020, a public tender was released and in June 2020 a general contractor entered into a formal contract with the City of Fort St. John to complete construction of Festival Plaza by the end of 2020.

This project is funded in part by the Government of Canada and the Province of British Columbia through the Investing in Canada Infrastructure Program.

The design of the plaza has strong influences from local ecology, landforms, culture and events. The following describes the primary design features planned for Festival Plaza: 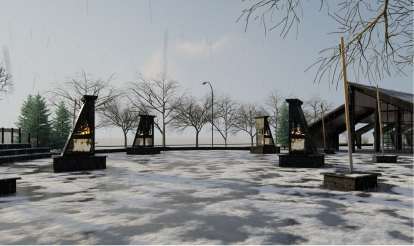 The City of Fort St. John, with the Fort St. John Art Council, is hosting a public art competition that offers local artists the opportunity to leave a lasting impression in the plaza.

Artists are invited to submit concepts for the creation of the cut-out imagery that will adorn the fire obelisks. Each fire obelisks has four flat metal sides that will have cut-out designs featuring the winning artwork from this competition. Winners will be selected by a three-member selection panel, who will score the submission using a criteria matrix, and each winning submission will receive a $2,000 honorarium.