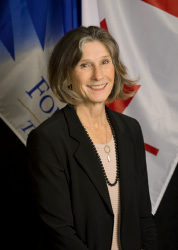 After a 42-year career in local government, and 13 years as the City Manager for the City of Fort St. John, Dianne Hunter’s final day is today, September 11, 2020.

Dianne’s career started in 1978 and spanned two provinces, five municipalities and one regional district. Throughout her career, she has held various positions in planning, human resources and administration before moving into the City Manager role.

In addition to serving Council locally, Dianne contributions are felt provincially, nationally and globally, with her involvement in several professional organizations and international programs; including:

The Federation of Canadian Municipalities recognized Dianne in 2018 for her outstanding work in Peru with the International Award of Excellence. This award joins recognition from the Province of British Columbia with the Certificate of Distinguished Membership Award and the Province of Alberta the Provincial Government Recognition Award for her “outstanding dedication and commitment” to local government.

“It’s easy to be a City Manager in a community that rolls steadily along each day, but in a vibrant, growing community located in a rich resource region like Fort St John, you need to be nimble and to think globally at all times.  I remember the day we hired Dianne, and I can see that we have come a long way.  We hope she gets to put her feet up and spend more time on the things she loves to do,“ stated Mayor Lori Ackerman.